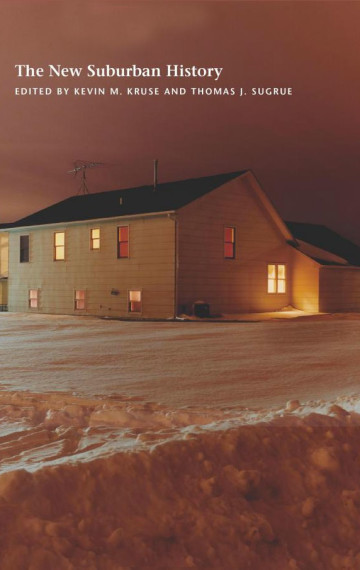 America has become a nation of suburbs. Confronting the popular image of suburbia as simply a refuge for affluent whites, The New Suburban History rejects the stereotypes of a conformist and conflict-free suburbia. The seemingly calm streets of suburbia were, in fact, battlegrounds over race, class, and politics. With this collection, Kevin Kruse and Thomas Sugrue argue that suburbia must be understood as a central factor in the modern American experience.

Kruse and Sugrue here collect ten essays—augmented by their provocative introduction—that challenge our understanding of suburbia. Drawing from original research on suburbs across the country, the contributors recast important political and social issues in the context of suburbanization. Their essays reveal the role suburbs have played in the transformation of American liberalism and conservatism; the contentious politics of race, class, and ethnicity; and debates about the environment, land use, and taxation. The contributors move the history of African Americans, Latinos, Asians, and blue-collar workers from the margins to the mainstream of suburban history.

From this broad perspective, these innovative historians explore the way suburbs affect—and are affected by—central cities, competing suburbs, and entire regions. The results, they show, are far-reaching: the emergence of a suburban America has reshaped national politics, fostered new social movements, and remade the American landscape. The New Suburban History offers nothing less than a new American history—one that claims the nation cannot be fully understood without a history of American suburbs at its very center.