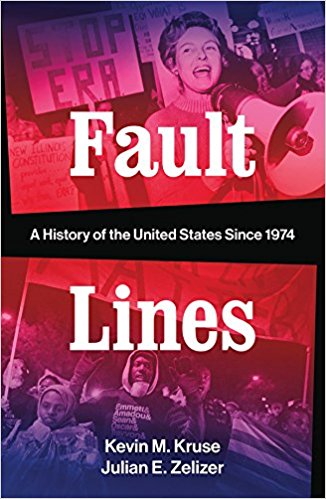 Two award-winning historians explore the origins of a divided America.
Available at Amazon

Two award-winning historians explore the origins of a divided America.

In the middle of the 1970s, America entered a new era of doubt and division. Major political, economic, and social crises―Watergate, Vietnam, the rights revolutions of the 1960s―had cracked the existing social order.

In the years that followed, the story of our own lifetimes would be written. Longstanding historical fault lines over income inequality, racial division, and a revolution in gender roles and sexual norms would deepen and fuel a polarized political landscape. In Fault Lines, leading historians Kevin M. Kruse and Julian E. Zelizer reveal how the divisions of the present day began almost four decades ago, and how they were echoed and amplified by a fracturing media landscape that witnessed the rise of cable TV, the internet, and social media.

How did the United States become so divided? Fault Lines offers one of the few comprehensive, wide-angle history views toward an answer.